The origins of the recipe for tiramisu, one of the most famous and international Italian desserts, are very uncertain.

There is a version that states that the tiramisu was born in the 17th century in Siena. Some pastry chefs in the region decided to prepare a delicacy to celebrate the arrival of the Grand Duke of Tuscany, Cosimo de Medici. As a result, they decided that the dessert should be a tasty delicacy made with simple ingredients.

Thus was born the famous Tiramisù, which at that time was called “La Zuppa del Duca” or “Soup of the Duke” in honor of Cosimo.  Immediately was conquered by the taste of this delicacy, so he decided to take the tiramisu recipe with him to Florence. It didn’t take long for this dessert to spread throughout the rest of Italy and become the favourite sweet of the nobles of the time.

The word tiramisu, in Italian tiramisù, comes from the Veneto dialect tiramesù and means “bring me up” or “cheer me up”. From there comes another more recent version, which places the origin of this Italian sweet in the 1950s in a restaurant in Treviso called Toulà. It was located near brothels and where customers ate this dessert for its revitalizing effect.

At that time, the authentic tiramisu had only five simple ingredients: eggs, sugar, Savoiardi lady fingers, black coffee and cocoa powder. The mascarpone was added later because, being a source of fat, it slows down digestion and has the opposite effect to its original purpose

It was in 1968, after the banning of this type of house, that Alfredo Beltrame, master of Venetian gastronomy, and founder of the Toulà restaurants, included the original tiramisu on the menu of his restaurants to the delight of all his diners. And later to the whole world.

The origin is uncertain, but what is certain is that this traditional tiramisu recipe is from Andrea Carissimo, an Italian who has lived in Spain for many years and is a great lover of good food, who has been kind enough to share his tiramisu best recipe with us.

1. Prepare two cups of long black coffee. Set aside and allow the coffee to cool down to room temperature in a deep dish while you make the cream.

2. Put 4 egg yolks in a bowl and 4 egg whites in another bowl. Remember to carefully separate the whites from the yolks, to beat well the whites should not have any trace of yolk. I recommend fresh eggs of size L. If you want to give more consistency to the tiramisu and less creaminess you can use less egg whites. It’s up to your taste. And the eggs must be at room temperature.

3. Weigh 100 grams of icing sugar. I prefer to make it with icing sugar because it dissolves better and faster.

4. Then beat the egg yolks with an electric whisk, adding only 50 grams of icing sugar. Beat the yolks until mixture has thickened and turned a very pale yellow.

5. Wash the wire beaters well, it is very important to make the meringue that the wire beaters are clean and dry. Once they are clean and dry, start to beat the egg whites until they are stiff. Once they are stiff (you´ll know when you turn the bowl upside down and it doesn´t drop), start adding the other half of the icing sugar (50 grams) little by little.

6. Add 500 grams of tempered mascarpone cheese to the egg yolks. Mix it with the electric whisk at low speed until everything is well integrated, without lumps of mascarpone.

8. Now dip the lady fingers in the cold coffee for about 4/5 seconds. If your Savoiardi are not sweetened I recommend adding a spoonful of sugar beforehand in the coffee. Once the biscuits are soaked in coffee, place them in a Pyrex dish. You may cut some of the biscuits to avoid leaving gaps. That´s ok.

9. Once you have placed the Savoiardi lady fingers soaked in coffee to create the base, it´s time to pour the cream and spread it evenly with the spatula.

10. Store it in the fridge with cling film on, so that it does not absorb odors, and let it rest overnight. That’s why I recommend making the tiramisu the day before.

11. Just before serving, put a heaping tablespoon of cocoa powder in a sieve and tap it and sprinkle the cocoa on top of the tiramisu. Et voilà you have the tiramisu ready to taste! 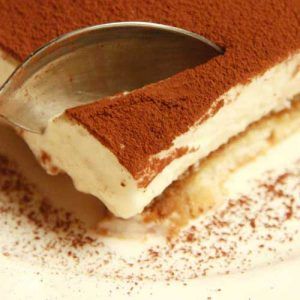 With this Italian tiramisu recipe you will delight the palates of your family and friends. It is an easy dessert to make and the ingredients are simple: eggs, sugar, mascarpone, Savoiardi biscuits, long black coffee and cocoa powder.
5 from 2 votes
Print Recipe
Prep Time 25 mins
Resting Time 6 hrs
Course Dessert
Cuisine Italian
Servings 8 people
Calor. 245 kcal

Hi, I’m Blanca and I love desserts! By day I work as an Interior Architect and by night I’m a mother of two angels. In my spare time I make desserts and write about it on my blog.

Hi you all, we are Blanca and Víctor!

We are two dessert lovers and the way we met could not be otherwise, eating around the stove. We strive everyday to make sure that the desserts you make at your home are de-li-cious.

Homemade and easy to make desserts for everyone.

All the desserts in this blog are made with ❤️

Have you tried this recipe?